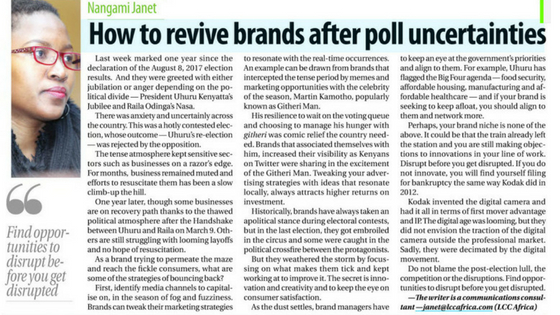 This article has also been published this morning on People Daily! Read on!

Last week marked one year since the declaration of the August 8, 2017 election results.  And they were greeted with either jubilation or anger depending on the political divide — President Uhuru Kenyatta’s Jubilee and Raila Odinga’s Nasa.

There was anxiety and uncertainly across the country. This was a hotly contested election, whose outcome — Uhuru’s re-election — was rejected by the opposition.

The tense atmosphere kept sensitive sectors such as businesses on a razor’s edge. For months,  business remained muted and efforts to resuscitate them has been a slow climb-up the hill.

One year later, though some businesses are on recovery path thanks to the thawed political atmosphere after the Handshake between Uhuru and Raila on March 9. Others are still struggling with looming layoffs and no hope of resuscitation.

As a Kenyan brand trying to permeate the maze and reach the fickle consumers, what are some of the strategies of bouncing back?

First, identify media channels to capitalise on, in the season of fog and fuzziness. Brands can tweak their marketing strategies to resonate with the real-time occurrences. An example can be drawn from brands that intercepted the tense period by memes and marketing opportunities with the celebrity of the season, Martin Kamotho, popularly known as Githeri Man.

His resilience to wait on the voting queue and choosing to manage his hunger with githeri was comic relief the country needed. Brands that associated themselves with him, increased their visibility as Kenyans on Twitter were sharing in the excitement of the Githeri Man. Tweaking your advertising strategies with ideas that resonate locally, always attracts higher returns on investment.

Historically, brands have always taken an apolitical stance during electoral contests, but in the last election, they got embroiled in the circus and some were caught in the political crossfire between the protagonists.

But they weathered the storm by focussing on what makes them tick and kept working at to improve it. The secret is innovation and creativity and to keep the eye on consumer satisfaction.

As the dust settles, brand managers have to keep an eye at the government’s priorities and align to them. For example, Uhuru has flagged the Big Four agenda — food security, affordable housing, manufacturing and affordable healthcare — and if your brand is seeking to keep afloat, you should align to them and network more.

Perhaps, your brand niche is none of the above. It could be that the train already left the station and you are still making objections to innovations in your line of work. Disrupt before you get disrupted. If you do not innovate, you will find yourself filing for bankruptcy the same way Kodak did in 2012.

Do not blame the post-election lull, the competition or the disruptions. Find opportunities to disrupt before you get disrupted.

Want to join the discussion?
Feel free to contribute!