Crisis management is one of the key management tasks that Public Relations professionals ought to have ready ammunition to handle should it arise.

In the recent weeks, Starbucks Philadelphia’s coffee shop had accusations levelled against them on biracial profiling. Two black men entered the coffee shop and requested to use the restrooms, only to be told that policy demands that only paying customers are allowed access. So they opted to wait for a friend supposedly a white, outside the shop but they were accused of trespassing and one of the employees went ahead and called the police.

This exchange could not help but reach the bystanders and within few hours the video of the incidence stirred an uproar and went viral on social media. There were all manner of comments from the irate public spewing disgust under the hashtag #BoycottStarbucks.

How the crisis was handled END_OF_DOCUMENT_TOKEN_TO_BE_REPLACED 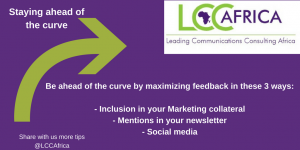 ‘We are elated and impressed by your work and we are proud of ourselves to have chosen you to journey with us. We no longer hold meetings to ponder and re-strategise about our plummeting sales, and high employee turnover following our implementation of your recommendations to our strategic plan. It is obvious that you are indeed great at your services.’

Isn’t that what every business owner, board chair or senior company executive would like to hear? By all means YES! Perhaps you have gotten such feedback and you are all so smug about the whole idea gloating over drinks to your friends. But, did you know you can use this as a bait for more clientele and be ahead of the curve?

Here are some of the ways: END_OF_DOCUMENT_TOKEN_TO_BE_REPLACED